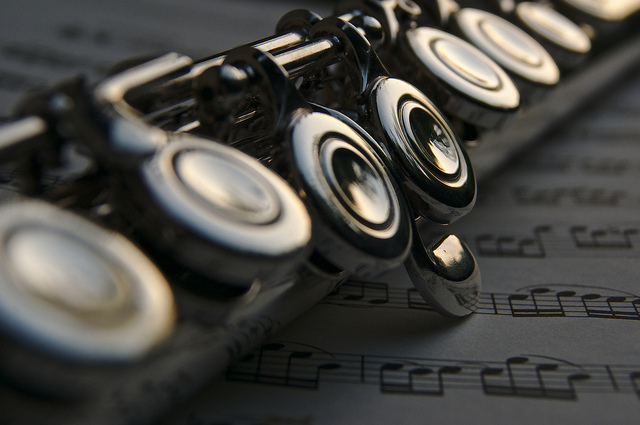 I grew up playing the flute, starting in fifth grade, and continuing through my freshman year in college. I was not particularly talented, but I worked hard. The musical notes were something to master as a technician. The competitions and auditions were a source of pride.  Being musical also paved the way to belonging. Doing well meant that I was part of numerous school groups as well as city and state youth groups. Photo by Zoltan Voros.

Music also gave me an outlet for expressing teen angst. I could bury loneliness in hours of practice or give voice to an adolescent crush with a siren’s song. Occasionally, it was a portal to joy.

But mostly, I practiced out of a fear of being humiliated and a drive to achieve, rather than a love of making music. I performed…well…to perform.

As an adult, I played sporadically. In my twenties, I played in a band that practiced during my lunch hour at work. Geeky engineers, gathering to make music.  In my forties, I was in a community band, made up of working adults who enjoyed playing together one night a week.  We weren’t great, and our concert audiences consisted mainly of family and friends.  My husband would attend with our grade-school aged sons in tow. We made a deal that I would show up for their school concerts if they showed up for mine.

About ten years ago, I abandoned the flute. Practicing felt hard. Even worse was the voice of my Negative Ego, berating me. Everything about my playing was inferior to what I remember I could do at 18 years old. Rehearsals were a validation that I was not enough.  With eyesight that would only get worse with age, and finger coordination that had deteriorated, I became discouraged. I believed the harsh voice in my head that said it was only a matter of time before I would be completely incompetent. I vowed never to let that happen. I stopped playing.

I realize now that this is akin to closing my heart, so that I would never get hurt–and shutting out love and joy in the process.

My husband, not being privy to the committee of voices inside my head, continues to see me as I saw myself decades ago. A decent player who is just a little rusty. Whenever he and I run into professional musicians (which is often in his line of business), he mentions that I am a flutist. Inside, I cringe.

Last night, on the invite of my husband, I attended a concert given by an accomplished Venezuelan flutist, Marco Granados, who has a thriving career as a soloist.  The concert was organized by a former student of Marco’s, and was held in a beautiful private home. An intimate setting for about 50 people, the audience was largely comprised of flute teachers and students and close friends of the organizer.

We sat next to a high school junior and her mother. The daughter had the enthusiasm and vibrancy of someone who has found her passion.  The two of them had attended a master class given by Marco earlier in the day. The mother talked about Marco’s love of teaching, remarking on his patience and thoughtfulness.

I was intrigued to hear Marco play.  A man with a friendly smile, he was dressed in a dark shirt, dark pants, and an even darker bow tie. Without flute in hand, I would have mistaken him for a next door neighbor, stumbling upon a party.

Before each piece he played, he provided cultural context, whether it was a dance that came from the oil-producing region of Venezuela, or a folk song inspired by Argentinian cowboys.  He spoke slowly and with a smile in his eyes, inviting the audience to drink in what they were about to hear.

While the music history lesson was interesting, what was more striking was how he played. Yes, he had a rich tone, flawless technique, and soulful execution. But what I saw was more than that. This was a man who played with joyous abandonment, a musician steeped in playfulness, an explorer of the human heart.  Two hours after he started, Marco got a standing ovation. His first instinct was to wave the crowd off, as if to say, “Oh, no really, it’s not necessary.”

After Marco finished playing, I stood in line to talk to him.  A young man was behind me and I asked if he was a student. He told me he was no longer a student, that he had stopped playing, and started again. And then he confessed, “It keeps me sane.”

When it was my turn to talk to Marco, I did what the girl in front of me did. I handed him sheet music I had purchased of two of his original compositions for his autograph. After he signed, I blurted out, “I appreciate your presence as much as your playing. Thank you for bringing YOUR joy.”

Something got stirred up inside of me. I found myself holding back tears, knowing that at any moment, I could be a blubbering mess, moved by the passion of a stranger.

I told him I had been a flutist but had not played in a long time. I admitted that he had inspired me to play again. True to the nature of this man, he asked me, “Will you play again?” I don’t remember what I said in response. But I was grateful for the question.

As we left, the organizer asked if my husband and I would give a ride home to one of her flute students. “Mary” was one the youngest present, still in middle school, with a fresh face and a boy-like figure. We had a nice chat on the way home. When I asked her what she liked about playing the flute, she simply said, “I don’t know. I just do.”

At 54 years old, I want to have the purity of a young girl who simply enjoys playing, the enthusiasm of that high school junior, and the courage of the young man in line who started playing again.

I want to remember those young faces of the flutist.

Thank you, Marco Granados, for showing me the joy and playfulness that is possible from playing the flute. What a huge gift you’ve given me.

PS. Click here for a taste of that joy and playfulness. Marco Granados played this piece, just for fun, at the concert I attended.  It is his own composition.

Posted in Personal Development, The Personal Journey, Uncategorized
← Unexpected Gifts in My ClosetI Am Not a Career Coach →