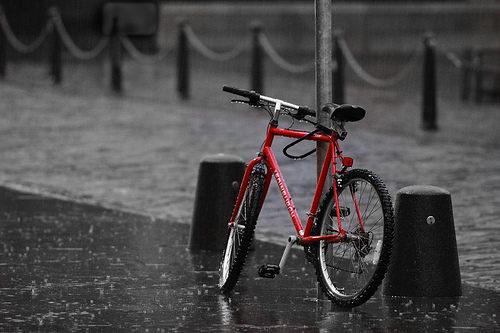 In just 5 days, Boulder County, where I live, received over 14 inches of rain.  I’ve heard that’s more than 75% of the typical annual rainfall for this area. What started out as a blessing from a late summer heat wave turned into what some have described as an apocalypse.

On the first day, rain was a welcome relief.  That day, my husband headed out the door to choir rehearsal with umbrella in hand, a rare accoutrement since we moved to Colorado over twenty years ago. Photo by John Gilchrist

On the second day, there was a steady drizzle that was neither here nor there.  The rain blended into a forgettable overcast sky.  I missed seeing the sun, but thought nothing more about the weather.

On the third day, a friend of mine remarked, “It’s getting soggy.”  The rain was an irritant, but alarm bells were not yet ringing.  We live 10 miles from the city of Boulder, on higher ground.  I went about my day, business as usual, preparing for two upcoming workshops ad making plans for a trip to Chicago.

When the rain stopped briefly, I went for a run.  It started raining again. By the time I got back to my house, I was soaked to the skin.  Throughout the night, I could hear the rain, sometimes pouring.

When I woke up on the fourth day, I knew that things had gotten worse, much worse. One client in Denver emailed to ask if I had power. A friend in Boulder told me that he had been up in the middle of the night, trying to divert water away from his basement, to no avail.  Another friend told me her office in Boulder was closed. I checked my crawl space for moisture and was relieved to find nothing unusual.

While eating lunch, I plopped myself in front of the television and watched live shots of creeks that had become raging torrents of murky brown water. On a road not more than five miles from my house, the road had buckled and three cars had fallen into rapidly moving water.  Miraculously, all three drivers were rescued.

It rained throughout the day. I was mesmerized and distracted.  Typing the Twitter hashtag, #boulderflood, I was like an addict, where each new piece of info was a hit that made me want more.  Photos of flooded intersections and park benches surrounded by water.  Announcements from the Boulder Office of Emergency Management about evacuations and road closures.  Images of University of Colorado students outside and inside, in a foot of water, struck by the novelty, unaware of the dangers and enjoying a day off from school. The buzzing sound of incoming text messages–flood warnings that kept expiring and continuing–only added to the tension. The live stream of one of the local television stations played in the background on my computer. Photo posted by brandish on Instagram @photogjake.

My husband, Chip, and I prepared ourselves for the worst.  Earlier in the day, Chip went into his office in downtown Boulder and moved things from the floor to on top of desks.  He brought home files and equipment for safe keeping. While I scolded him for even going into the office, he reported that the streets were not too bad…yet.  I searched for flashlights in case the power went off.  Chip filled up a large pot, normally used to cook pasta, with water.  On a Post-It note on top of the lid, he wrote the words, “Emergency H20”. My brother, who lives close by, called looking for a shopvac as a backup to his sump pump.

These are times when concern for others is as great as concern for yourself. I emailed friends who I was worried about. I phoned my sister and mother, both nearby.

That evening, armed with an umbrella, I took a walk around my neighborhood, to see first hand how bad things were.  We live in a golf course commuity.  Normally, a small creek runs through the golf course. What I saw astounded me.  The creek had overflowed its banks and had become a river, a coffee-colored watery ribbon, winding its way down the fairway.  The same murky brown water that I had seen on television was now churning violently in front of me, no more than 30 feet from my neighborhood street.  It was surreal.  New water hazards had popped up overnight–ones that no golfer was prepared to face.

Like so many others who are in awe of the ruthless power of nature, I took a video of the water monster on the 8th hole.  I emailed it to my sons, away at college in Atlanta and Dallas.

I was shaken, knowing that conditions could get worse before they got better.  The rain was not expected to stop for several days.  I watched more local television coverage and later, saw that the flood had made the national news. I went to bed hoping for the best and expecting the worse.

On the fifth day, Friday, September 13, the local paper declared in a 2-inch headine, “100-YEAR FLOOD”.  Boulder was eligible for federal disaster aid, thanks to an emergency order signed by the White House. The National Guard was called in to aid in rescue efforts. Two people had died and one was missing. The main highway into Boulder was shut down and the public was asked to stay out, so that first responders could do their work. #boulderflood was in the top ten trending hashtags on Twitter. The University of Colorado, for only the third time in history, canceled a football game, scheduled for the following day.  The first two times were after JFK’s assassination and after 9/11.

Chip and I watched television throughout the day, hypnotized by a bird’s eye view of towns underwater, not just in the foothills of Boulder County, but also in Northern Colorado and further east. The main interstate between Colorado and Wyoming, our neighboring state to the north, was closed due to flood waters covering the highway.  Misery was spreading to new parts of the state, to college towns like Ft. Collins and Greeley and to farming communities like Evans and Milliken. The water from the mountain streams and rivers had to go somewhere and on this side of the Continental Divide, it flows east.

I emailed more friends, hoping to hear they were safe and sound.  Chip’s dad called from Chicago. I emailed out of state friends and family, to let them know we were okay.

While I was still open for business, my heart wasn’t into it.  I rescheduled two calls with locals. None of us were in the mood for work.  Our priorities were elsewhere.  I went ahead with calls to people in other parts of the country, but I found myself struggling to stay focused.  One friend near Ft. Collins wrote: “Tried two days now to get to work with no luck—there are just no routes unless you are a hovercraft or plane/helicopter.” To which I replied: “Work is a lost cause, even for those of us who work at home. Mesmerized by the Twitter feed for #boulderflood. Still waiting to hear from two friends who I know have houses in
harm’s way.”

Even though my family and house were unharmed, the days’ events had taken their toll on me. I was emotionally exhausted.

In the evening, I heard the low rumbling of helicopters flying toward the mountains.  It was not the light whipping sound of a radio station’s traffic reporter.  These were large military Chinook helicopters, designed to carry lots of people and cargo.

Yesterday morning, on the sixth day since the rain started, I saw blue skies.  My husband opened up the windows and sun streamed through the living room window. I sat on the back patio for the first time in nearly a week. I stayed off Twitter for half a day, giving myself an emotional break from the incessant updates. For a moment, things felt normal.

Just like 9/11, things will not be normal for a long time.  Even as Boulderites are cleaning out mud from their houses, more rain is forecast. New places in Colorado are being threatened by rivers overflowing their banks.  Stretches of roads are damaged, or completely gone.  Established parks have been stripped bare of vegetation, picnic tables carried away by the rushing water.  Mudslides are a real danger.  Hundreds people are still unaccounted for.  Rescue operations are less than 2 days old.  The good news is that over 1200 people have been rescued so far, 700 by helicopter. Yesterday’s local paper heralded the following: “EMERGING FROM THE STORM”.

As stories of survivors and casualties come out, there will be another collective wave of emotion, amplified by social media, television, and radio. Closer to home, the garbage truck still has not come, three days after the normal pickup. Casual conversations are peppered with “staying safe and dry” and “sump pumps”.  Mindsets are shifting to fundraising and donations for the victims of the flood. My husband and I have watched more television in the last 3 days than we do in 3 months. My friend, Evelyn, who I have biked with in Boulder on Sunday mornings for years, was photographed by a national news agency, returning to her flooded home.  Things are definitely not normal. Photo by REUTERS/Mark Leffingwell.

And as it was with 9/11, people show their resilience and love in tough times. Overwhelmingly, this is what I’m seeing and feeling.

Posted in Current Affairs
← Week One: Not as Bad As I ImaginedWhat I Believe →