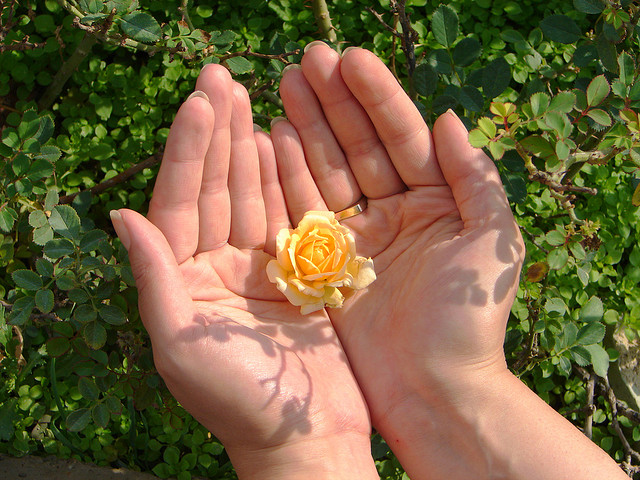 Three years ago, I hit a low point in my life.  I was on a self-imposed sabbatical,  hoping to reverse the effects of working on a losing proposition.  For two years, I had poured 90% of my time and energy into a start up that provided career development programs to universities (aka My Alumni Link).  While I didn’t love producing webinars, I loved the results I got for end users. Photo by Hamed Saber.

Trouble was, I couldn’t make a living from that business.  In the meantime,  my coaching practice dwindled to just a few clients. My bank account was next to nothing.

More importantly, I had reached a point where the slightest irritant, imperfection or “life happens” moment brought me to tears.  My emotional bank account wasn’t at zero. It was overdrawn.

Four weeks after stopping work, I felt no better.  The world, as I painted it in my mind, kept closing in on me, like a poorly pitched tent sagging in a night of rain. (This isn’t just a metaphor. On a camping trip with my husband shortly after we got married, I remember trying to hold up a tent in the middle of the night with my feet propped up in the air, as the rain pounded on the canvas.  We eventually retreated to our car.)

You’ve heard of the saying, “The mind is a terrible thing to waste.”  Well, the mind can also be the tyrant that lays waste to the rest of you–beating your soul down, wreaking havoc with your physical well-being, and playing chicken with your emotions.  That’s where my mind (and the rest of me) was three years ago.

Today, I feel blessed for that state of affairs.  I am crystal clear in my thinking when I say this.    It took hitting bottom to re-evaluate my assumptions, examine my beliefs, and decide that I was my own worst enemy. Life had handed me a golden opportunity to start over, with a stronger foundation in place. 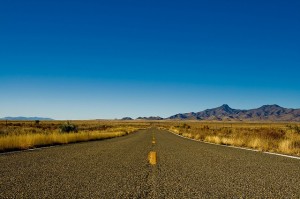 The First Blessing: Turning Back

For months leading to hitting bottom, I ignored the Turkish proverb, “No matter how far you have gone down the wrong road, turn back.”  I had thought that to turn back would be to declare failure and that could only lead to worse things. Photo by John.

Failure was my demon. It was also my best friend.

That may sound odd.  However, I know now that if I hadn’t failed at My Alumni Link, I would still be doing scripted webinars–something that didn’t play to my strengths.  I would still be feeling mediocre about the work, and cajoled by end user results to continue anyway.   Failing was something I had pictured as a big, bad monster. In reality,  it was merely a signal to turn around, to choose a different path.

This is the first blessing of burning out.  It  allowed me to stop doing work that was good, but not great.  I was unconsciously settling, because…well, because what started as a way to diversify my business at the depths of the Great Recession, became an obligation to “work the plan”.   I know now–plans be damned.

After I stopped doing the things that drained me and started doing the things that nourished me, I began to feel better.  Six months later, after  “filling up my gas tank”, I had a conversation with my friend, Richard Smith. Richard was hired by the government of Singapore to create a teacher renewal program and has a passion for helping professionals avoid burning out.  He astutely understood that “feeling better” was an invitation to go back to my old ways–the behavior that got me into burnout in the first place.  Richard got me thinking about my underlying beliefs and assumptions that drove my daily behavior.   My assumptions about failure were just the tip of the iceberg. 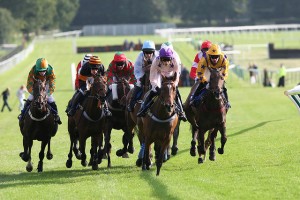 I discovered a  part of me that I lovingly named “Racehorse”.  It’s the part of me that hurries to fix problems quickly, whether they needed fixing or not.  My ego, at its worst,  has me believing that a racing mind is a good thing, that I haven’t  done nearly enough to build my business (and as a result, am being left behind) and that I need to achieve results quickly.  Racehorse had been driving me crazy for a long time and would continue to do so, if left to its own devices. Photo by roger blake.

The second blessing of burning out was this:  It gave me an opportunity to identify the stories in my head that were no longer serving me and create new stories that filled me with joy, hope, and love.

Life is no longer a struggle, because I no longer see it that way.

Something odd happened when I became aware of “Racehorse” and the falsehoods it had been telling me.  My relationship with time changed.  Because I was no longer scrambling as part of my daily M.O., I had time to let situations unfold in a way that brought better results.  Rather than forcing an outcome, I listened deeply. Creative solutions emerged while on long walks, in the stillness of a yoga practice, after percolating for days. 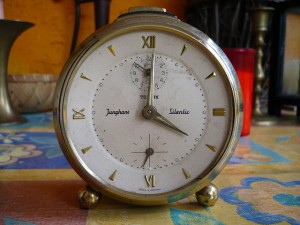 I also discovered that by slowing down, it took less time to finish tasks, even ones that I didn’t particularly enjoy. Small actions became potent.  My mind focused on the essentials of getting the job done, without the anxiety.  As if by magic, time expanded.  Work became integrated into my life, rather than the other way around. Photo by Eddl

The third blessing of burning out is the gift of time.  As Arianna Huffington calls it in her book, Thrive, I have time affluence, where most people experience time poverty.  I no longer fill every available block of time on my calendar, driven by an ego-gratifying feeling of “being productive”.  Instead, I purposely allow space in my schedule–time outside of the office that makes me more creative, centered, and intentional.   Whether it’s an outing with my elderly mother, accompanying her to a water aerobics class, or mid-day walks with a friend, I come back to the office refreshed.  I found out that number of hours at my desk does not correlate to results.  What a radical idea!

I am no longer in a race against the clock, but rather walking with life, at my natural pace.

The Fourth Blessing:  Purpose and Place

Re-building myself from the inside out allowed me to “upgrade my operating system”.  Things flowed and I experienced moments of a “frictionless” world.  A year after burning out, I was ready to re-kindle my livelihood, with ease and grace.

When you crash and burn, it automatically loosens your grip on past identities.  Dark moments allow for a a clean break from the past.  When I finally came back into the light, into my light, I knew that my work would be different as well.

I searched for a good six months on what that might look like by playing new roles and experimenting with new business models for My Alumni Link.  Nothing really clicked.

I don’t remember the exact moment when I decided to shift focus and go back to what I knew would make me happy–coaching.   But I’m glad I made the decision to focus on making my coaching practice the best it could be.

I worked with a business coach, George, for the better part of a year.  One of the first exercises George asked me to do was to write my story.  He called it the “compelling why”.   While I had written multiple versions of my story over the years–for both marketing and personal development purposes, I was writing this version from a stronger place.  Burning out made me more humble, more compassionate (toward myself and others) and more human.  One of the best things that I received from George was a deep understanding of what it means to be of service.  When the student is ready, the teacher appears.

The fourth blessing of burning out is that it led to finding my place in the world.  It returned me to my purpose.  While I knew that I enjoyed working with “boundary crossers” and using both right and left brain, I had not connected that to my own story–of being a misfit who, after years of trying to fit in, finally walked her own path.  From there, emerged brilliance.  And from there, I connected with kindred spirits, who saw me for who I am.   Thus was born the phrase, ‘Stand Out and Belong” and laser-sharp clarity on who I am best suited to serve.  I help “crazy brilliant” misfits find their place in the world.

My life and my work went from “off the shelf” to “bespoke”. 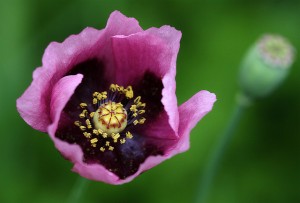 And so I end up here, in a place of immense gratitude.  I have an abundance of time, money, and meaningful work, when I know 99% of the world’s population would be happy to have one or two out of the three.  Abundance leads to service. As a friend said to me recently: “You can’t truly serve if you aren’t feeling abundant.”  I know what it is to be of service, on a daily basis. Photo by aussiegall

Other things I’m grateful for:  I chuckle at how synchronicity plays out in the world–hearing the right words in a conversation at just the right moment, uncovering someone’s story that gives me insight into the goodness of a loved one, getting an email from a stranger, on a topic that I am writing about.  I go to sleep at night, in a house full of men (two young and one older), where there is peace and laughter and respect and curiosity.  Even now, writing about what I have that is so dear to me, and makes life worth living, gratitude and its cousin, joy, fill me up, and spill out in the form of tears.

The fifth blessing of burning out is this:  When I hit bottom, it began my journey not only to soar higher, but to feel the breeze intensely on my face and to be thankful for the ability to fly.  This year, I have been blessed with glimpses of seeing life as it is, not what I want it to be, to be both participant and observer, to allow “extraordinary receiving”.

Instead of trying to “keep it all together”, I am partnering with–and savoring–life. 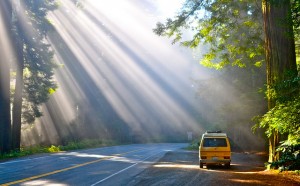 It’s an odd feeling knowing that from my darkest moments are planted the seeds for my brightest light. Perhaps that is what life is about–transforming struggle into goodness, seeing the extraordinary in the ordinary, and knowing that both sides of the spectrum are available to me, in every moment.  It’s my choice. Photo by Linda Tanner

Many thanks to all who have helped me on my journey.  You know who you are.  Which reminds me of one last blessing.  I used to think I had to “do it” on my own, whatever “it” is.  It is both a relief and a great joy to know that I’m not alone–that help is always available to me.

Posted in Gratefulness, Personal Development, The Personal Journey, The Power of ......, Uncategorized
← Who Is That Woman?Brilliant Conversations Archive →