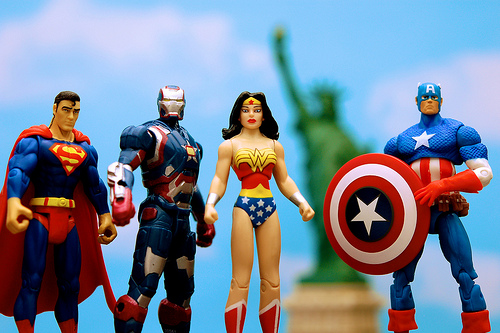 Note: This is another in a series of articles that I wrote a decade ago.  Looking back, I can see that my history with cars has taught me the value of partnering with life–listening to what life brings me, good and bad, and riding the wave.   –Carol

I’m the luckiest woman in the world.

I had dropped off my brother-in-law at the airport. It was 7am and I had plenty of time to get home for an 8am phone call with a client. As I pulled away from the departure curb, I heard a funny sound coming from the car—louder than the engine and quieter than a small explosion.  It was a smoother version of the sound of snowplows, the morning after a big storm, clearing the streets before the morning commute.

Could it be a flat tire?  I stopped the car and got out. I noticed a tow truck driver across the way, sleeping with his head tilted back. At least help was readily available, if not fully awake. Hmmm….tires looked fine.  Alert and curious, I got back in the car.  I exited the airport.

Something was definitely wrong.  I sped up and the sound got louder. I slowed down and the sound remained. I had visions of a tailpipe or muffler dragging on the highway, sparks spewing from the back. I imagined other drivers seeing the sparks and saying to their spouse, “Wow, would you look at that, Mabel.  That car is about ready to explode and the driver is completely oblivious!  What do you think we should do?”  And then Mabel says excitedly, “Run for the hills!” Okay, maybe the only thing that was running amuck was my imagination.

Several miles away from the airport, I knew that I had to stop. I got off at the first exit. I live in a metropolitan area where the city planners thought it best to locate the recently built airport in a place that neither man nor mouse would likely inhabit—someplace on The Plains where only SUVs with air conditioning and full tanks of gas dare to traverse. 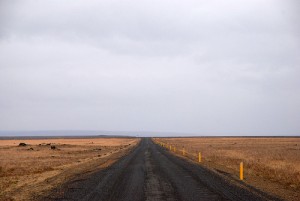 I found myself on a road that was not much more than a straight line to get from somewhere to somewhere else, all the while going through nowhere. I pulled over at the first chance, a dirt road that looked like it wasn’t sure if it wanted to go anyplace. I looked under the car.  Okay, now all bets were off. A mangled piece of black plastic was wedged under the car. It reminded me of a dry version of the Loch Ness monster.  Could I have driven over this Thing and dragged it for miles from the airport?  Unlikely.  Photo by KOKONIS

Oddly enough, I didn’t panic.  Not that I didn’t have reason to. It was early in the morning, in the middle of nowhere, with a car that wasn’t fit for driving much further, and no clue as to what to do next. And oh, by the way, I had a client calling from Israel for a coaching session in less than an hour.

Life is funny. Sometimes, I find myself in unexpected situations, just so God or the Hall Monitor of the Universe can see what I will do.  “Let’s throw a little car trouble into Carol’s day and see what happens. This will be good.”  I imagine this higher being giving a shout of encouragement when I use my intuition and let myself be guided by something other than fear. When I pass the test with flying colors, God lets me know that everything will be okay. “So, she’s not a ninny.  She didn’t panic and let the Gremlins take her into a tailspin. Bring in the rescue workers.” 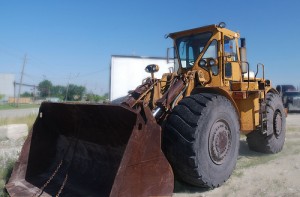 I looked down the desolate road to nowhere and saw three yellow vehicles coming toward me.  The lead vehicle was an SUV, which was followed by a flatbed truck, which was followed by a front loader.  That’s right, the big bulldozer-like construction equipment used to move dirt, sand, and anything else that can be scooped.  I noticed the sign on the side of the SUV: “Denver International Airport, Field and Maintenance Department”. It was a crew of three going out for the day. Photo by flakflik

The road to nowhere led to the maintenance headquarters for DIA, one of the largest airports in the country.  I could hardly believe my good fortune.

When the SUV stopped, a woman, in her 40’s, in a work shirt and jeans got out. She had the seriousness of a police officer and the calmness of a nurse.  She asked what the problem was, looked under the car, and asked me to drive backwards to see if the Thing would dislodge. “Looks like it’s bolted to the car.”  By now, the flatbed truck had stopped and a younger, friendly looking man got out.

Before I knew it, the woman was underneath the car, calling to the man to get a wrench.  She held out her hand, like a surgeon would for a scalpel, waiting for the right tool.  She was clearly comfortable around machines and men. The front loader had stopped, and an older man who reminded me of what a lumberjack might look like had joined his colleagues.

“I’m really grateful that I ran across you. I’m not sure what I would have done otherwise.” I enjoyed playing the damsel in distress, even if it was Uber Woman rescuing me.

The Lumberjack chimed in. “We usually don’t carry these tools, even though we’re supposed to. We just happened to have them with us today.” I guess when you have a front loader, what else do you need?

After several tries with different tools, Uber Woman had unbolted the part of the undercarriage of my car that had been dragging since I left the airport, five miles back.  She produced the Thing with the matter-of-factness and satisfaction of a dentist extracting a bad tooth. Yep, here it is.  Where do you want it? I put it in the trunk to show my mechanic. 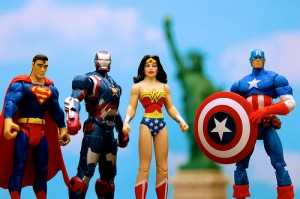 My superheroes left as quickly as they appeared. And I made it home in time for the call from Israel. Photo by JD Hancock

I still wonder how the timing of it all could have come together so neatly.  Me getting off at the first exit from the highway, turning onto a lonely road, and bumping into a maintenance crew, starting work for the day. I couldn’t have planned a rendezvous like that if I had wanted to.

I’d like to think that good things happen to good people, that some people are just born lucky.

But there’s something deeper at work. When we are able to ride the wave of life, without resistance, something extraordinary happens. Things become easy.  Problems get resolved or become non-issues. Life unfolds and we become observers in the process.  Luck left me in awe. Life taught me to be grateful. Find out what happens for you when life is allowed to unfold.

Postscript:  A decade later, in November 2013, while on a 10-day road trip across the US, I once again had trouble with my Volvo. This time, smoke billowed from the back of the car and the engine was quickly losing power.  I was on a highway outside of Nashville, TN,  1100 miles from home, where I knew no one.

Five hours after pulling off the highway, I was driving a different Volvo, newer and more luxurious than my old one, financed at a rate of 2.79%, and insured by my agent back in Colorado.  The series of events leading to up to this was nothing short of a miracle, including flagging down a tow truck driver at a Jack-in-the Box, breaking down less than 5 miles from one of the best Volvo dealers in the country on a Friday afternoon, and test driving a gently used Volvo that had been serviced and pampered by the same dealer.

Ten hours after this roadside episode, my husband and I pulled up to our hotel in Atlanta. The next day, I was beaming with pride, as I watched our son sing in a choir concert, on the campus of the university that he attends.  Indeed, I am the luckiest woman in the world.

Posted in I Couldn't Have Made This Up, The Personal Journey
← How Big Will You Dare to Be?What Is This Blog About? →