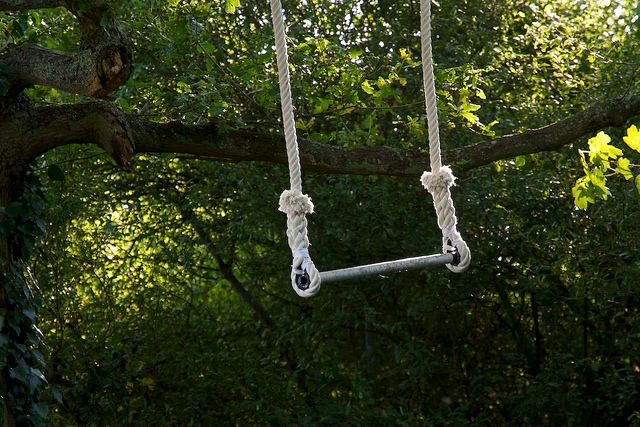 This is a popular post I wrote many years ago, as I was starting my coaching business. It applies not just to starting a business but any change in your life that you’ve been wanting for a long time.  Enjoy!–Carol

There’s a beautiful metaphor for change. It’s a trapeze.  The trapeze artist knows that in order to be ready for the bar coming her way, she has to let go of the old bar, the one which is currently providing safety. And she knows that there is no safety in holding on to something that doesn’t take you where you want to go.  There’s only distraction and frustration.

I know of a woman who is dating an aspiring life coach. I say aspiring because he’s dipped his toe into the water but hasn’t taken the plunge—a few coaching classes and clients and sporadically attending networking meetings for coaches.  She asked me about things I had started in the coaching community, including a monthly coaching studio at a local coffee shop.  As I was talking, I realized that my energy and creativity had come out of commitment, a willingness to take the plunge, without attachment to the old way of life.

Had her friend hired a coach himself?  “Well, no, he’s really not in a financial position to hire a coach.” I could imagine that his inner critic was having a field day with that one.

Had he completed a training program from an accredited coaching school? “Well, no, he’s taken a couple of classes here and there.”

I asked whether he had started to build a network of peers to tap into—for advice, for referrals, for support when I heard, “I’m pretty much his support system.”

Alone, untrained, and without a role model.  How could he possibly succeed?

The thought crossed my mind that this aspiring life coach will always be just that—aspiring.  It’s hard enough to make it as your own boss when you are committed to the path. It’s nearly impossible when you have your feet in two different places. We don’t get what we want in life without commitment.

I talked about the push I needed to start my own business in the form of a layoff. “Oh, yes, when he got laid off, it gave him time to think about what he really wanted to do in life. And it turned out to be coaching.”  There’s a large territory to cross between finding out what you want to do and giving it the space and support it needs to actually unfold.

I have a friend who is a coach and a consultant.  As she was starting her own business last year, she was lucky enough to land a consulting contract for two days a week for six months. It was work she had done before and it paid well. She was also unlucky enough to have gotten this contract. It kept her from building the business she really wanted. Two days a week was two days too much when it came to birthing a new business. There was no incentive to make a go of her new business.

The poet Goethe writes beautifully on this point:

“Until one is committed, there is hesitancy, the chance to draw back, always ineffectiveness. Concerning all acts of initiative (and creation), there is one elementary truth the ignorance of which kills countless ideas and splendid plans: that the moment one definitely commits oneself, then providence moves too. All sorts of things occur to help one that would never otherwise have occurred. A whole stream of events issues from the decision, raising in one’s favour all manner of unforeseen incidents and meetings and material assistance, which no man could have dreamed would have come his way.

Whatever you can do or dream you can, begin it. Boldness has genius, power and magic in it. Begin it now”.

Let go of the trapeze bar you’ve been holding on to so tightly. Swing your whole body towards the next bar and watch it come closer in all its magnificence. At the moment that you let go and feel yourself flying through the air, your heart may stop.  Your nerves may tremble.  Your face may grimace. Don’t be scared.  Know that your greatest reward for commitment is being fully alive.

Posted in The Personal Journey, The Power of ......
← Not Getting What We WantRe-Purposing Yourself →